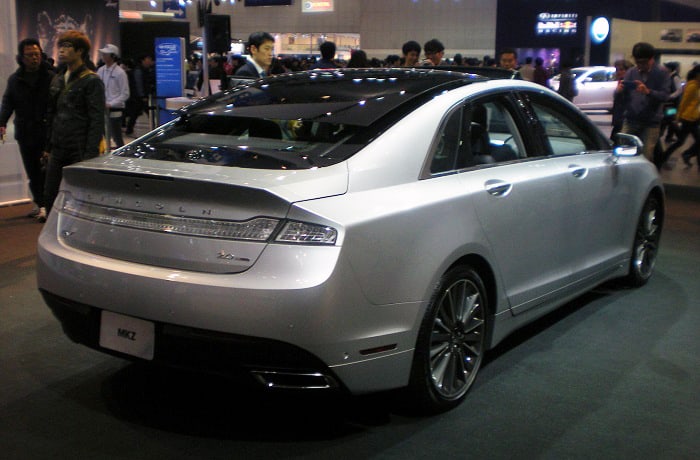 The Lincoln MKZ is a mid-size luxury sedan that has got tons of loveable features. The exterior and interior look amazing, it’s comfortable to drive in and the performance is fantastic.

Similar to other cars, the Lincoln MKZ still has got some problems that most owners find annoying.

Some of these issues are related to the battery, in-car electronics, air or water leaks, and squeaking of the brakes. Today, we are going to focus on the Lincoln MKZ panoramic roof problems.

When the 2017 Lincoln MKZ was listed on caranddriver.com as one of the best cars with a panoramic roof, most people developed an interest in this model.

Featuring the largest opening roof on any sedan, the design of this particular model was quite impressive. Despite this great achievement, Ford has been on the public’s radar regarding issues with their panoramic roofs.

If you own a Lincoln MKZ or you are planning to get one, here are some of the common panoramic roof problems. Getting to understand these problems will help you know what to do should you run into any of them in the future.

This is a problem that is common with the 2013 Lincoln MKZ. Considering the number of complaints, Ford should be aware of this problem and even though the MKZ was discounted as of last year, we hope not to see this issue in any other of their models.

Anyway, back to the sunshade. This problem usually causes the sunshade to either open or closes partially. This forces the driver to either constantly hit the button for it to close or open.

Or, they have to physically force it. Such a problem can be very annoying especially when you are driving. And this may force you to make a stop to deal with the issue physically.

Though it may not seem like a big issue, repairing a sunshade can set you back more than $1,000 at the dealer.

This is not unless you have a warranty. You may have better luck sourcing the sunshade from an OEM supplier for at least $500 and pay for the installation fees. Or even better, you can replace it yourself.

Before replacing a malfunctioning sunshade, you should find out if there is something that is blocking it on its track. Dirt build-up may cause it to do so. It’s important to rule out other issues before replacing the entire thing.

The shade of the Lincoln MKZ roof has also been known to get off track. This is an easy issue to fix. All you need to do is find out where the shade has become unglued and fit it back.

Also, if metal strips are blocking the track of the sunshade, you can remove them.

Whenever a mechanical part starts producing grinding noises when opening or closing, that is usually a sign of disaster.

A creaking panoramic roof isn’t only a problem that affects the Lincoln MKZ, but it affects nearly all cars with this feature.

Due to extensive use of the panoramic roof, the motor and cables that control the mechanism start to wear out. This is why you start hearing grinding noises when you open or close it.

The only solution for this problem is to replace the motor as well as the damaged cables. Fortunately, your dealer can handle this for you as long as it is in the warranty.

Ford has been known to take their sweet time when making repairs to vehicles. So expect to brush your shoulders with the guys at the dealership if you want this issue fixed.

However, we recommend having this issue fixed at a Ford dealer because they have more experience.

Also, you should never ignore squeaking sounds coming from the panoramic roof as one day it may stop working completely. Plus, have the issue fixed as soon as you notice it.

With time, the alignments and seals on the Lincoln MKZ panoramic sunroof get worn out. And it starts leaking water into the cabin.

A leaking roof can be a menace. Fortunately, fixing leaks on the roof is a simple procedure not unless you are dealing with a cracked roof.

You just have to find where the leaks are coming from and seal them off. If the alignment is off, then you will need to get them back on track.

4. Increased Temperatures in the Cabin

There are pros and cons to having a sedan with the largest opening roof. The wider the panoramic roof opens the more light it lets in. Also, the hotter your cabin can become.

With sun rays directly hitting your interior, your cabin will always be hot during summer. This can be worsened by having a black interior.

Panoramic roofs are a great feature. However, when they get stuck, you won’t love them anymore. Unlike in other cars with panoramic roofs, the ones in the Lincoln MKZ model rarely get stuck.

That’s why we listed this problem last on the list. Though it is rare, it may happen to you, and you will need to know how to get yourself out of this mess.

A stuck panoramic roof can be caused by two things; a blown fuse or a faulty motor. Start by replacing the fuse, if that doesn’t work, then find a new motor.

At the dealer, you can get a motor for your Lincoln panoramic roof. Or you can source an aftermarket one. When you replace the motor, the roof should be able to open smoothly.

The above are some of the most common roof problems found in this car. However, there are others such as the glass being shattered by hail. This may be very unlikely considering Ford uses a very thick glass.

Also, for those who are very sensitive, driving around with an open panoramic roof can be noisy. You may hear whistling or rattling sounds. This can be quite annoying.

Has Ford Ever Received a Panoramic Roof Lawsuit?

To gauge the prevalence of panoramic sunroof issues with Ford, it’s a good idea to find out if they have had any lawsuits in the past. And yes they have. The last lawsuit to be filed against Ford was in 2016.

Even though the individuals who filed the lawsuit stepped back, we can’t simply ignore what actually happened.

The plaintiffs claimed that Ford sunroofs are vulnerable to exploding without warning thus being a hazard to motorists. This happened to their 2013 Ford Escape.

This lawsuit also tagged Lincoln MKZ’s ranging from 2013 to 2016 model being vulnerable to the panoramic roof glass shattering.

This lawsuit claimed that the glass uses on the roof was too thin to handle severe weather and climatic conditions.

The MKZ’s have never been recalled because of roof issues. However, over 2,600 models of the Ford Transit Connect vans were recalled in 2014 because of leaking sunroofs.

But for the past few years, we haven’t heard of any lawsuits related to Ford, we can therefore assume that they fixed this issue and their panoramic roofs are safer.

What are the Pros of the Lincoln MKZ Panoramic Sunroof Feature?

Even though you may run into the above issues, you shouldn’t deny yourself the open-air experience of driving in a Lincoln with an open panoramic sunroof.

For decades, drivers of motorcycles and convertibles were the only ones who could enjoy the fresh air when driving. However, when sunroofs were introduced, car owners with hardtops could also enjoy the same experience.

A panoramic roof gives you a 360-degree view and that’s why it is referred to as panoramic.

The panoramic roof on a Lincoln MKZ looks stunning. The glass is neatly placed on smooth lines. And whether you are driving at night or during the day, you can look up and admire the beautiful sky or surroundings.

With such a feature on the Lincoln MKZ, you get direct access to light, fresh air, and sunshine. Even on those bad days at the office, when you get to the car, opening the panoramic roof will for sure improve your mood.

Yes, there are drawbacks to a panoramic roof. The first downside is that you may experience the above issues at any time.

Panoramic sunroof repairs can be quite expensive especially if you don’t have a warranty. And some of these issues such as shattering the glass when driving can be life-threatening.

With a sunroof, your cabin temperatures will always be high during summer. And it will be worse if you have a black interior that absorbs heat.

A panoramic roof is quite heavy and will affect gas mileage as well as the handling of the vehicle.

Luxury aside, what most car owners are interested in knowing is how safe they are with a glass roof on their heads. The number of reports related to the shattering of the MKZ panoramic roof is low.

The odds of a tire blowout are way higher than that of an exploding sunroof. So, panoramic sunroofs are both safe and unsafe.

So far, Ford has tried their best to upgrade the sunroof mechanism and they use thick glass to ensure safety.

As a careful driver, always inspect the condition of your panoramic roof. And if there are cracks or other problems, fix them as soon as possible.