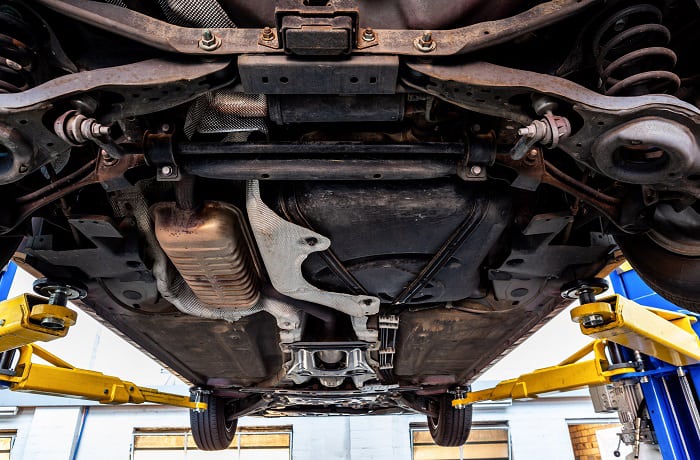 For the past seven decades, Ziebart has been the leading undercoating service provider to thousands of car owners.

With hundreds of service centers located in various parts of the world, Ziebart continues to apply thick and abrasive resistant undercoating in cars and thus protecting the undercarriage from salt, dirt, moisture, and rust.

If you live in a rust-prone area, you should consider getting an undercoating. Now that you are looking up Ziebart undercoating problems, chances are, someone has recommended this brand to you or you have discovered it from your own research.

Ziebart undercoating though effective does have its fair share of drawbacks. That is what we are going to look at in the article below.

1. It Won’t Do Much When Applied Over Rusty Metal

The thing about Ziebart undercoating is that it is perfect for new vehicles or those that are yet to get rust. If you apply Ziebart on metal that has already rusted, there will be no benefit at all.

After a while, the rust starts to spread and if you don’t deal with it soon, the damage caused may be significant.

If you think of Ziebart undercoating as a rust treatment, we are sorry to inform you that it exists only to protect and not to get rid of rust.

Therefore, if you use it on a used car that already has rust, you will neither treat nor prevent the spread of rust in your undercarriage.

It would be great if Ziebart could enhance the formula of their undercoating by adding rust removal capabilities.

One of the reasons why you may be looking for an undercoating product is to protect your vehicle’s undercarriage from dirt or salt because you drive on very muddy terrains.

Should you opt for Ziebart undercoating, it may last for about three years.

However, if you drive in very rough conditions then this undercoating is unable to withstand heavy abuse.

Unlike cars with an undercoating that are driven in cities, those that go off-road will need more frequent re-applications. It is also important to note that Ziebart undercoating can’t withstand regular pressure washing.

3. After a While Cracks Start to Develop

There have been reports that after three years of Ziebart application, cracks start to occur and these act as the entry points for moisture.

Cracks can develop even earlier than that and it’s why you should always check the condition of your Ziebart undercoating. This will ensure that you can notice cracks early in advance and avoid rusting.

4. Ziebart Undercoating is Known to Lock in Moisture During Application

Over the years, Ziebart undercoating has been blamed for locking in moisture during application. Not to defend this brand but there is something car owners don’t get.

There is a valid reason why Ziebart’s undercoating is sold through dealers. As an undercoating product, it needs to be applied correctly so that it can bond to the surface of your undercarriage.

A professional undercoating service provider should be able to apply this product without locking in moisture.

Therefore, even though this is a valid Ziebart undercoating problem, it can be easily avoided by having the product installed by an expert.

5. It May Not be Such a Worthy Investment If You Don’t Plan to Own that Car for Long

Don’t get this wrong, an undercoating is beneficial, however at times, when you evaluate the cost, in some scenarios it may not be worth it.

If you plan on owning the car for a year or two, paying the $500 at the dealer for a professional Ziebart undercoating installation isn’t such a great idea.

It may increase the resale value of your car. But in new cars, it can take several years for the metal underneath to start rusting. And it can even take longer if you live in an area where they don’t use salt on the roads.

Though useful, you should evaluate the above factors before paying for the Ziebart undercoating when you buy a car at the dealer.

It is also important to inquire if the rust protection product comes with a warranty. In most cases, Ziebart has a 10-year warranty.

It’s not just Ziebart but all undercoating will block your car’s drainage system if applied wrongly. Back to the point where this product needs to be applied by an expert.

Cars have drainage systems that are located in the undercarriage. When you cover these systems with the undercoating, your car won’t have a place where it can drain water or other fluids.

This is a preventable problem. If applied by an inexperienced individual, one can easily miss a spot and this will be the entry point of water and air.

It is recommended that Ziebart is applied only by an expert who is 100% familiar with the structure of car undercarriages. This will ensure every part is covered and the drainage holes are left open.

7. To Get Ultimate Protection from Ziebart Undercoating It Must Be Applied Regularly

Another problem with this brand and this is something their customers have complained about is that the undercoating doesn’t last for very long.

After a year or two, the undercoating often starts to crack, forcing car owners to keep on going back to the dealer for repairs or re-application. There are more premium undercoating brands out there that last longer than Ziebart.

8. Ziebart Rubberized Undercoating Makes It Hard for Mechanics to Work on Your Car’s Undercarriage

There is no doubt that undercoating plays an essential role in keeping our undercarriages free of dirt, water, and salt. However, mechanics hate working on cars with undercoating as this limits their access.

The likes of Ziebart rubberized undercoating make it even harder as the product spills easily and the mechanic ends up being soaked in it after taking twice the time to work on fixing a faulty part in your undercarriage.

If you were planning on getting the Ziebart undercoat then the above are some of the problems you are most likely to face.

Some of these problems can be easily avoided by having the undercoat installed by a professional dealer.

Not unless you have some experience with undercoating, we recommend you let an expert do it for you. This will prevent issues such as the trapping of moisture under the undercoat or blockage of drainage holes.

Now that you are aware of Ziebart’s undercoating problems, let us look at other issues that may be related to this product.

How Long Does Ziebart Take to Dry?

The undercoat takes at least 24 hours for it to cure on the undercarriage. During this period, you should minimize movement because impurities or dirt can get inside the product and make it ineffective.

If the undercoat is being installed at the dealer, drive your car straight home and park it inside the garage. Ensure that you take a route that won’t interfere with the new undercoating.

How Long Does Ziebart Last?

It may last for up to seven years. But this applies to town cars that rarely drive off-road. For cars that are used on all terrains, Ziebart will last for at least three years.

For car owners who will settle on Ziebart undercoat, we recommend a yearly checkup. You can do it yourself or take it to the dealer.

The important thing is that you look for cracks and should you find any, use the Ziebart 10 year warranty to have them fix it for you.

The sooner you notice a crack or opening in your undercoat, the better the chances of avoiding rust.

Does Ziebart Only Work on New Cars?

Not entirely. Ziebart can be installed on any car’s undercarriage provided it hasn’t yet rusted. If there is rust, then it should be removed and then Ziebart undercoat installed.

The reason why the Ziebart undercoat is mostly applied to new cars is that these are completely rust-free.

In used cars, however, there may be some rust, and when you apply the undercoat, you will be wasting your time and effort because the rust will already be there.

Is Ziebart Undercoat Worth It?

That depends on your needs as a car owner. Do you plan on driving that car for more than 5 years? Do you live in an area where cars are very vulnerable to rust? In this case, a Ziebart undercoat will be worth it.

If your roads are packed with salt because of winter, then having an undercoat is crucial. But, if you intend to own the car for a year or two or live in an area where rust isn’t a familiar term, there is no need for an undercoat.

Before getting the Ziebart undercoat, confirm with your car manufacturer first. Some cars have a built-in structure designed to prevent rust.

When you get a third-party company to apply an undercoat, you void the car company warranty on corrosion perforation. Before you decide whether to or not to get the Ziebart undercoat, weigh the pros and cons.