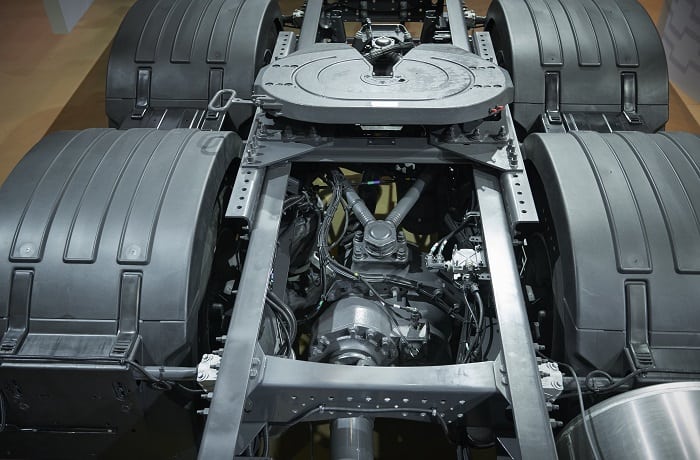 This is a project that would take two to three hours, depending on the size of the truck frame. Please note that these are the average sandblasting rates for a truck frame.

If there are more things on the truck, such as an engine, bed, or cab, the prices will be higher.

Factors that Affect the Cost of Sandblasting a Truck Frame

Certain factors determine the cost of sandblasting a truck frame. You should familiarize yourself with these to determine if it’s worth it.

Wherever you take your truck frame to be sandblasted, the person you hire will charge depending on their level of expertise in the field. A reputable sandblasting company with years of experience in this game will charge more.

But you are assured of a decent job. On the other hand, a relatively new sandblaster will charge less, but you may not get the results you are looking for.

In most cases, the quality of the service delivered is directly proportional to the fees charged. In other words, you get what you pay for.

These days, sandblasters charge at an hourly rate. Their rates, as mentioned earlier, range from $50 to $200. This project takes around two to three hours if only the truck frame is sandblasted.

For truck frames only, the work will be done in a shorter duration, and the costs will be low. However, if additional parts such as the engine or axles are also to be sandblasted, your sandblaster will ask for more.

If you want the truck frame to be sandblasted and done something else such as be powder coated or primed, prepare to pay for more. Extra services attract more costs.

If you want to save up on sandblasting fees, you can perform some of these solutions by yourself. For instance, you can prime the vehicle by yourself.

You have probably come across trucks whose frames are affected by heavy corrosion. If your truck has a heavy rust scale, the cost can be a bit higher.

This is because the sandblaster will need to use a lot of time and material to remove the rust. The condition of the truck frame also contributes to the total cost.

If your truck frame features complex surface areas, the cost may also shoot higher. Certain trucks have surfaces that can only be blasted at one angle. Such surfaces require special attention, which the sandblaster will factor in the project’s cost.

How Do I Lower Sandblasting Costs?

Parting with several hundreds of dollars can leave a dent in your pockets if you are on a budget. So, if you want to have your truck frame sandblasted, here are tips that will help you save on costs.

• Compare the rates and prices of various shops.

Many of us make the mistake of walking into one of the blasting shops near you and paying directly for this service. If you want to get a bargain on sandblasting of your truck frame, you need to compare rates and prices.

You will be surprised at how big a gap there is between different sandblasters. Before hiring a particular guy, do your research first.

• If possible, don’t ask for other services.

Once your car has been sandblasted, you definitely have plans for it after. If it’s priming, you can do it yourself and lower the costs. However, if you want it to be powder coated, you better leave that to the experts.

• Disassemble the truck frame to the best of your abilities.

When you disassemble the different parts of the truck frame, you will be making the work much easier. Your efforts should be reflected in the final costs.

• Get rid of stuff that may be on the truck frame.

If there are decals or stickers, removing them before having the frame sandblasted will also lower the costs.

For those of you who are DIY enthusiasts, if you have ever seen a neighbor or colleague with a sandblasting unit, you may consider borrowing and doing it yourself.

This option will be cheaper because you will only be buying the sandblasting materials. And you may also have to hire a home unit if your neighbors or friends don’t have one.

A  DIY sandblasting of your truck frame will take an extremely long duration. You may have to work on it for two to three days to get all the paint and rust out. Let’s not even get started with how inconvenient it will be.

Unless you own a sandblasting machine and have the skills and experience, it’s often not worth it to embark on such a project. When you follow our tips, you can be assured of paying affordable rates for sandblasting services.

Should I Sandblast My Truck Frame or Get a New One?

Cost-wise, sandblasting your truck is more cost-effective than buying a new one. It makes more sense for you to buy a new frame if your old one has been heavily damaged by rust and can’t be saved with sandblasting.

But if there is hope that sandblasting can restore your truck frame, it’s worth giving it a try.

How Much Should You Charge to Sandblast a Truck Frame?

For those of you who started as DIY enthusiasts and have sharpened your sandblasting skills. You can always venture into this industry and make good money from it.

If you are interested in finding out what you should charge to sandblast a truck frame, here is a quick rundown. Charge a starting hourly rate of $50 to $100. Your rates should be affordable because you are just starting, and you’re probably working as a freelancer.

Charging too much may discourage most clients from seeking your services.

As you grow your brand, you can increase the rates. If you prefer to charge a one-time fee, you can charge $200 for sandblasting a truck frame. You should pay for the materials and still make some profit from that amount.

Do not be afraid to charge more if the client wants additional services such as priming. Providing sandblasting services can be a lucrative career for those passionate about this line of work.

How Long Does It Take to Sandblast a Truck Frame?

If you want it to be painted or powder coated, it may take longer. However, the average time for having your truck frame sandblasted by an expert is three hours.

On the other hand, it would take longer if you were doing the sandblasting by yourself. You may be done after a few days.

Some even take weeks to remove all the rust and paint on a truck frame.

If you want this job to be completed faster, we would advise you to pay for the truck frame to be sandblasted. This will take only a few hours, and you can have your truck frame looking much better.

Will the Sandblasting Costs Include Both Interior and Exterior of the Truck Frame?

Most sandblasters will treat the truck frame as a whole unit and sandblast the entire thing both on the inside and out. But some charge extra for sandblasting the dashboard area.

Whether the costs will cover the interior and exterior, you will have to find out from the guy to who you will delegate this job.

Do Sandblasting Costs Depend on Where You Live?

It’s funny that your location can affect the costs of sandblasting a truck frame. Do you know that in some cities, people pay up to $1000 for sandblasting of the truck frame?

In certain locations, sandblasters charge more than the average prices. These are marketing dynamics that clients can avoid by engaging in thorough research.

It’s essential always to compare prices. Because if you can have your truck frame sandblasted for $500, why should you pay $1000? It’s unrealistic.

Is It Worth Paying for Your Truck to Be Sandblasted?

If you go through comments on people’s experiences with sandblasting, you would take your truck frame to the nearest blasting shop and pay upfront. The thing is, sandblasting is not easy.

This is a project that will mess up your garage. Cleaning it will be a menace. You have to wear protective clothing and but the material to be used to blast the car. If you don’t have the skills or expertise, it will take longer.

For the average person that wants their truck frame sandblasted, paying for it is always better than doing it yourself.

Unless this is something you would enjoy doing, there is no need to torture yourself with such a tedious and complicated task. We have already shared tips that will help you lower your sandblasting costs.

When you combine that with researching various sandblasters and comparing their costs, it will be worth paying for your truck to be sandblasted.