When tearing apart your engine for a rebuild, you will encounter many problems requiring urgent repair. For instance, you may come across loose flywheel bolts.

The flywheel is a heavy disc that is fitted on a rotating shaft. Its purpose is to smooth out engine pulses. It also acts as storage for rotational momentum.

With time, the bolts that securely hold the flywheel come off due to constant exposure to vibrations. Fixing loose flywheel bolts is easy because all you have to do is bolt them back.

If they are damaged, you can replace them. But before you move to another engine part, it’s important to prevent these bolts from coming off in the future, and that’s where Loctite comes in handy.

Loctite is a threadlocker. It contains an adhesive that secures bolts and nuts in position. Loctite cures into a strong material that ensures bolts and nuts don’t loosen up irrespective of the pressure or vibrations they are exposed to.

There are a bunch of threadlockers in the market. However, Loctite is known to provide a durable adhesive that requires minimal maintenance.

Loctite has been around for several decades. Therefore, it’s a brand that is recognized worldwide. Besides securing bolts and nuts in position, Loctite also prevents corrosion that can affect steel nuts.

Loctite works by removing air gaps in the threads, thus ensuring the locks are adequately fastened.

Should You Put Loctite on Flywheel Bolts?

Experts recommend the use of Loctite on flywheel bolts. With Loctite on the bolts, they will be securely held in place.

It will prevent the bolts from backing off for a long time, irrespective of how many vibrations the engine produces. It is safe, effective, and offers lasting results with minimal maintenance.

Before putting Loctite on flywheel bolts, there are certain requirements you have to meet. First, you need to torque the flywheel bolts to factory specifications.

This is very important because once the Loctite cures, the bolts shouldn’t be torqued. After repairing or replacing the flywheel, you should put Loctite over the bolts.

When you make a habit of putting Loctite on flywheel bolts, you will never have to worry about the bolts loosening up because of vibrations.

Which Loctite Should I Use on Flywheel Bolts? Blue or Red?

Loctite has two types of threadlockers. There is a blue and red threadlocker. Both are safe for use on flywheel bolts. But they have some notable differences.

Besides color, the main difference between blue and red Loctite is the strength of the adhesive. The blue Loctite, although it forms a strong bond, can easily be removed using common tools. The red Loctite is formulated to act as a permanent flywheel bolt adhesive.

For flywheel bolts, it’s recommended that you use the blue Loctite. The flywheel isn’t a part that is removed regularly. But it does require the occasional servicing. Therefore, there is no need to use a permanent adhesive on it.

Blue Loctite is easy to remove, but that doesn’t mean it’s inferior. It’s a strong product with excellent adhesive properties. Many people have used blue Loctite on their flywheel bolts, and most reviews are positive.

When it comes to blue vs. red Loctite, you will come across many conflicting opinions. Different car owners have varying views about which color Loctite is ideal for flywheel bolts.

Many of them often gravitate toward red Loctite because it’s much stronger. But the only challenge that arises is when it’s time to remove the bolts with red Loctite.

As you compare these two colors, choosing the solution that seems most ideal for you is important. If you want a permanent fix, go for red and vice versa. 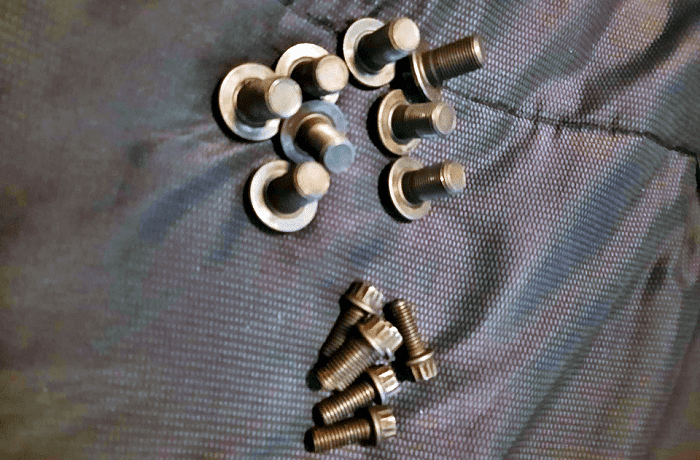 How Do I Apply Loctite on Flywheel Bolts?

The application of Loctite is pretty straightforward. Here is a quick guide on how to go about it.

Step 1 – Clean the surface of the flywheel bolts

Loctite works best on a clean surface. Therefore, ensure no oil or dirt is on the surface of the bolt. Such elements can affect the adhesion strength of Loctite.

Step 2 – Apply several drops of Loctite on the flywheel bolts

You don’t need to drench the flywheel bolts with Loctite. A few drops will suffice. Ensure that you apply Loctite on the area the bolts engage with the flywheel. Loctite will move along the thread on its own.

Step 3 – Torque the flywheel bolts according to factory specifications

Twist the bolts on the flywheel as per the factory specs and give the Loctite time to cure. Twenty-four hours is often enough time for Loctite to dry into a strong adhesive that won’t come loose when exposed to strong engine vibrations.

How Can I Remove Flywheel Bolts with Loctite?

Even though the goal of using Loctite on flywheel bolts is to prevent them from becoming loose, there are certain scenarios where you may have to remove the bolts. That’s why we advised you to go with blue Loctite since it’s easier to remove with ordinary tools.

Anyway, removing Loctite flywheel bolts depends on the type used. For blue, use common tools that are needed to unbolt flywheel bolts.

For red Loctite, you will need a blowtorch to melt the adhesive with the help of a hand wrench. Make sure that you wear heat-resistant safety gloves when dealing with red Loctite.

Can Loose Bolts Damage the Flywheel?

Putting Loctite on flywheel bolts is very important. The flywheel is well-hidden in the engine compartment. And that’s why it’s difficult to know whether your bolts have come loose.

Driving a car with loose flywheel bolts is very dangerous. When the flywheel isn’t held at the required position, the disc can be eaten away by nearby mechanical parts.

Even though it’s not mandatory for you to Loctite flywheel bolts, it can prolong the flywheel’s lifespan.

Do Cars Come with Loctite on the Flywheel Bolts?

You need to understand that Loctite isn’t a mandatory requirement for flywheel bolts. There are many cars whose owners have never used anything on the flywheel, and the bolts have never become loose.

This product is a precautionary measure that prevents bolts from loosening up due to vibrations.

Is It Necessary to Use Loctite on Flywheel Bolts?

It’s not necessary. But it is advisable. If you have just replaced the flywheel on your car, putting some Loctite on the bolts is a good idea.

Once the flywheel has been assembled, this is a part of your car that you won’t tear apart any time soon. Having some Loctite guarding the bolts will give you peace of mind knowing that your flywheel is firmly being held.

When you come across horror stories of how people encountered loose bolts on their flywheels, you will understand why it’s important to use Loctite.

Considering that Loctite is affordable and easily available, there is no reason why you shouldn’t use it as an additional safety measure on your car’s flywheel.

However, as mentioned earlier, it’s not a must for you to Loctite flywheel bolts. You will be okay if you ensure your bolts are in excellent shape and torqued according to factory specifications.

If you don’t tighten the flywheel bolts using a wrench, there is a good chance that they will come flying out when exposed to engine vibrations. Basically, Loctite is an additional safety measure that ensures the bolts are held firmly on the flywheel.

Is Loctite Safe to Use on Flywheel Bolts?

It is 100% safe. As a car owner, we understand that you may have some reservations about using new products on your vehicle. But you can be assured that Loctite will not harm your flywheel, the bolts, and any surrounding components.

The only thing Loctite will do is create a stronger adhesion between the bolts and the flywheel. If you use red Loctite, you may experience slight challenges when removing the bolts. Besides that, you have absolutely nothing else to worry about.

Does Lube Do the Same Job as Loctite?

When exposed to vibrations, lube will allow the bolts to loosen on their own. Therefore, it’s not advisable to use lube on flywheel bolts.

Loctite, on the other hand, cures to create a strong bond between the bolts and the flywheel. Loctite does the exact opposite of lube. Instead of allowing the bolts to loosen up on their own, Loctite promotes a stronger bond between the two.

Another notable difference between Loctite and lube is that the latter makes removing the bolts easier. In contrast, Loctite makes bolts more difficult to unscrew.