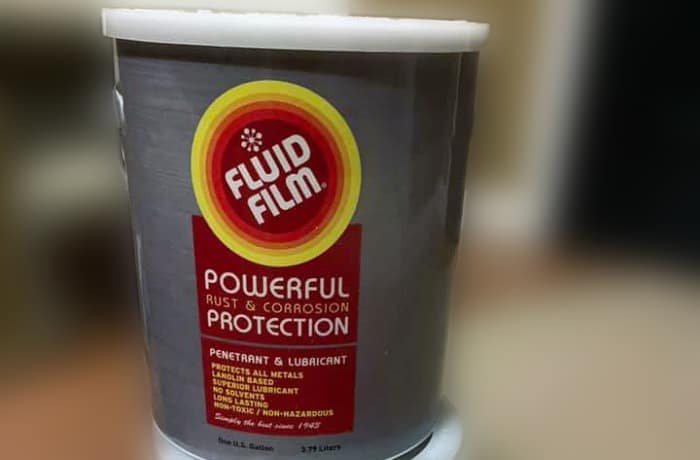 The mechanical parts in your car need to be lubricated regularly if you want them to perform efficiently. Also, during lubrication, it’s essential to prevent the formation of rust. This is why most lubricants for car parts come with some form of rust protection capabilities.

There are many lubricants for car parts. One of the most popular options is Fluid Film. Even though it’s an excellent lubricant, besides metal, there are rubber parts under your car hood.

The lubricant used mustn’t damage the rubber components. That’s why it’s vital to determine whether a product such as Fluid Film is safe for rubber.

According to the manufacturers of Fluid Film, this product won’t damage plastic or rubber. However, it should be used cautiously on non-oil-resistant rubber. When used on such a material, it may cause swelling.

Considering that there are several rubber components in your car, such as CV boots and bushings, you may be reluctant to use this product to lubricate mechanical parts.

After all, even if you are extremely careful, there is a likelihood of spraying some fluid film on the surrounding rubber.

What are Some Experiences Car Owners Have Had with Fluid Film on Rubber?

Having confirmed that Fluid Film may affect rubber, you may be confused about whether you should or shouldn’t use it.

To determine if Fluid Film is a danger to rubber, I took the initiative of doing some research on various car forums about the effects of Fluid Film on rubber. To my surprise, many car owners have and continue to use Fluid Film without noticing any effects on rubber.

Several car owners have admitted to accidentally getting Fluid Film on rubber parts such as bushings. And the Fluid Film did not eat the rubber or cause any side effects.

Should You Spray Fluid Film on Rubber?

Fluid Film should be sprayed directly on metal. If possible, avoid getting Fluid Film on any rubber parts. Even though many people haven’t had a bad experience with Fluid Film and rubber, that doesn’t give you the green light to spray carelessly over rubber bushings.

You need to remember the caution given by the manufacturer about rubber swelling when exposed to Fluid Film. To be safe, be very careful not to get Fluid Film overspray on rubber.

If you do, you can wipe it off with a clean cloth as soon as possible. This ensures the ingredients of Fluid Film don’t get absorbed by the rubber.

Also, when you overspray Fluid Film on rubber by accident, you don’t have to panic. Many people have done so, and their rubber parts weren’t damaged.

But this shouldn’t be an excuse for you to soak your entire hood with Fluid Film without being mindful of the rubber parts.

Overall, Fluid Film is an excellent lubricant and corrosion-resistant agent. These are benefits that you simply can’t overlook. But at the same time, you must be mindful of your car’s rubber parts.

What Happens When Rubber Swells?

Undoubtedly, car manufacturers love using rubber. That’s because it’s a strong material and can withstand temperature changes and other elements. But rubber is still vulnerable to wear and tear. Let’s take non-oil-resistant rubber, for example. When it comes into contact with Fluid Film, it starts to swell.

When rubber swells, the crosslinked network gets damaged, and the rubber deteriorates. In most cases, rubber swells when it makes contact with hydraulic fluids, synthetic lubricants, and petroleum.

Due to these reasons, you should avoid exposing the rubber components of your car to these products. If you notice that the rubber is swelling, it should be repaired as soon as possible to avoid damaging other parts.

Fortunately, most components made out of rubber aren’t expensive. The problem is usually associated with installation, especially if the part being replaced is located deeper within the engine or body.

Why Do Some Rubber Parts Swell When You Apply Fluid Film?

When you get Fluid Film overspray on rubber, the ingredients are absorbed. That triggers a reaction in the rubber, causing it to swell.

You have to understand that this reaction won’t occur on all types of rubber. It will mostly happen on non-oil-resistant rubber.

If you are not an expert mechanic, it can be difficult to know if the rubber under your hood is oil-resistant. The only thing you can do is be cautious.

Older rubber compounds are more vulnerable to Fluid Film. Therefore, if you own a vintage or classic, you should think twice about spraying Fluid Film.

However, if your car was made from 2000 and beyond, rarely will the rubber parts in your car get damaged by Fluid Film. There is some risk, but it’s minimal.

Is Lanolin Toxic to Rubber?

Lanolin is one of the main ingredients found in Fluid Film. It is a natural oil wax that is extracted from sheep’s wool. Besides acting as a lubricant, Lanolin has a wide range of applications.

Other than non-oil-resistant rubber, Lanolin is safe to use on plastic, rubber, and metal. The other ingredients found in Fluid Film are also safe, and you shouldn’t be worried about adverse reactions with rubber or any other surface.

There are Several Fluid Film Alternatives

So far, it’s clear what Fluid Film can or can’t do. However, if you still have doubts, you should consider other lubricant and rust protection products.

Fortunately, rust prevention and lubrication are things that all car owners can’t live without. So that means there are plenty of rustproofing lubricants on the market.

If you are worried about the side effects of Fluid Film, there are plenty of alternatives on the market. As you shop for an alternative, be very keen about whether the product is considered safe for plastic and rubber.

Some manufacturers may offer misleading information. It’s always crucial to confirm whether a lubricant is safe for rubber from third parties.

If you are extremely cautious, you may be worried about Fluid Film dripping on rubber parts and causing them to swell. The good news is that Fluid Film doesn’t drip unless it’s over sprayed.

If you are concerned about fluid film dripping, make sure that you spray only adequate amounts. Also, you wouldn’t have to worry about Fluid Film damaging rubber parts if you don’t spray directly on them.

Why Do People Spray Fluid Film Even on Rubber?

When you do more research about Fluid Film and rubber, you will come across many claims about people using it directly on rubber and not noticing any swelling afterward. That’s because their cars have oil-resistant rubber that isn’t affected by the ingredients in Fluid Film.

Spraying lubricant and rust protective coatings are often tiresome and time-consuming. The product should be applied all over metal components for better results.

Most people knowingly spray Fluid Film over rubber because they don’t have the time or energy to identify rubber parts and avoid them. Instead, they soak the entire car with Fluid Film.

And since it’s penetrative, it spreads, lubricates, and protects various parts from rust. So, people spray everything with Fluid Film to get the job done faster and more easily.

Can I Perform a Patch Test with Fluid Film?

Of course, you can. If you like Fluid Film’s effectiveness, you can perform a patch test on a rubber component in your car and see how it reacts.

If you have some old bushings that came with the vehicle, you can perform a patch test on these and check whether the material is oil-resistant or not.

If the rubber swells, you will know that the other rubber parts on your car will react the same. But if it doesn’t, it means the rubber is oil resistant and won’t be affected by Fluid Film.

A patch test is a sure way to determine if your car’s rubber parts can withstand Fluid Film exposure.

What Can You Put Fluid Film On?

On rubber, Fluid Film should be used cautiously. But how about other parts of the car? Should you avoid anything else? Fluid Film is formulated for use on all metal mechanical parts.

You should be cautious about using Fluid Film on weatherproofing as they could be made of non-oil-resistant rubber.

Can You Wash Fluid Film Overspray on Rubber?

You can easily wash it off if you get some Fluid Film overspray on rubber. Fluid Film comes off pretty quickly when pressure washed.

And since it won’t be absorbed right away by rubber, you don’t have to panic when you spray some Fluid Film on such a surface. However, Fluid Film can last for five to eight months if not washed.