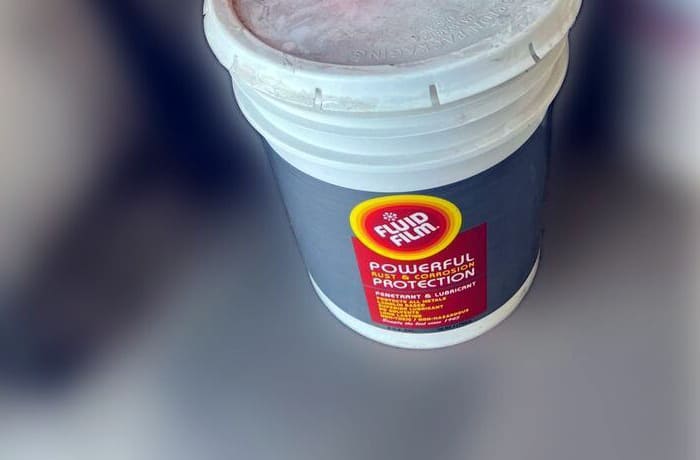 Fluid Film is internationally recognized as one of the best corrosion preventive and lubricant products on the market.

It stops rust on contact, and thanks to its penetrative capabilities, Fluid Film can find its way to hard-to-reach areas on your vehicle.

In the automotive industry, Fluid Film has a wide range of applications. But can it be used on car paint? If so, will Fluid Film damage car paint? These are some of the issues we will tackle in this article.

Can Fluid Film Be Used on Paint?

According to the manufacturers of Fluid Film, it can be sprayed directly to paint and will not harm it. If you get some Fluid Film on your car paint, you don’t have to worry about any damage or adverse side effects.

We all know how delicate automotive paint is. Therefore, it’s crucial to determine whether Fluid Film is safe for car paint.

Reasons to Use Fluid Film on Paint

Since paint doesn’t need lubrication, corrosion prevention is the only benefit you may get from this product. The manufacturers of Fluid Film claim that this product will act as a polish on paint, preventing rust from forming on your car frame.

This seems like a valid reason to use Fluid Film on paint. But is it logical? Later on. We will list the main applications of Fluid Film on a car.

On that list, you won’t see any recommendation that it should be used on car paint. On a painted car part, rust often develops from within and not outside.

When you see a rust spot, its origin is always inside the frame of the car. Therefore, adding a layer of rust protection on the surface of a car isn’t necessary.

Your car paint will protect the frame from rust. Fluid Film is best used on the undercarriage of a car or other finishes but not the paint.

Therefore, the bottom line is that you can use Fluid Film on paint, and there won’t be any damage. But, it’s not necessary. Fluid Film isn’t formulated for use on car paint.

How to Remove Fluid Film on Paint?

If you get some Fluid Film on your car paint, you don’t have to panic because there won’t be any adverse effects.

Nonetheless, if you don’t want this coating on your car paint, it’s important to know how to remove it. There are several methods of removing Fluid Film on car paint. They include;

• A high-pressure wash of around 1000 to 3000 psi. The manufacturers of Fluid Film praise how the product creates a strong bond with the surfaces it has been sprayed on.

However, an industrial strength pressure wash should eliminate the Fluid Film on car paint. This is the easiest and quickest removal method.

• If you don’t have access to a pressure washer, Fluid Film can be removed from car paint using warm water and a detergent. When using detergents on paint, you have to be careful. A strong detergent can remove Fluid Film on paint.

But at the same time, it threatens the paint beneath. Go for an averagely strong detergent. Also, use a microfiber cloth to clean. It’s more effective at scooping up Fluid Film deposits.

• On car paint, Fluid Film can be rubbed in like wax. This isn’t a removal method, but it will eliminate the protective coating. If you still want the Fluid Film on the surface, you can rub it as wax.

Can a Surface Be Treated with Fluid Film Before Painting?

Indeed, Fluid Film is effective at preventing corrosion. However, it shouldn’t be used on a surface that is about to be painted. The ingredients found in Fluid Film can cause the development of fisheyes after painting.

In case there was some Fluid Film on a car surface, it should be cleaned thoroughly before that part is painted since it has the same effect as grease and oil. As tempting as it may be to treat a surface with fluid Film before painting, you need to be aware of the side effects.

Should You Use Fluid Film on Paint?

From a professional point of view, there is no benefit to using Fluid Film on a painted surface.

Everyone knows how effective Fluid Film is at protecting metal from corrosion. However, it will be redundant to spray Fluid Film on an already painted surface. If it were bare metal, Fluid Film would create a protective layer.

But since there is already paint on the surface, that will provide sufficient protection from rust. And should your paint get chipped, it should be repainted and not sprayed with Fluid Film because of aesthetics.

Instead, it would be a waste of the product that would have otherwise been used on the undercarriage or other parts.

Uses of Fluid Film in the Automotive Industry

To help you understand better that Fluid Film doesn’t have to be used on paint, here are the main uses of this product on cars.

The main use of Fluid Film in automotive applications is to act as a vehicle undercoating. The undercarriage of a car is the most susceptible to corrosion. The reason for that is that it directly interacts with road salt, mud, water, and plenty of other ingredients, which are rust recipes.

Fluid Film creates a rust protection barrier on the undercarriage, eliminating rust spots on contact. People love Fluid Film as an undercoating because it creates a non-drying and self-healing layer that doesn’t crack.

Fluid Film also can penetrate the nooks and crannies on your undercarriage. This ensures the entire undercarriage is covered with a premium rust protective coating.

The battery terminals are another area of your car vulnerable to corrosion. But with Fluid Film’s non-drying formula, you are assured of maximum protection.

Besides preventing corrosion, Fluid Film is non-conductive. Therefore, it will not interfere with the function of the battery terminals.

Fluid Film offers chrome surfaces many benefits. First, it prevents pitting. Secondly, it protects chrome from the effects of brake dust. Fluid Film is also known to shine chrome while keeping bugs away.

Can Fluid Film Be Used Instead of Wax?

Earlier, we mentioned that Fluid Film could be rubbed as wax on paint because it contains wool wax. However, that doesn’t mean it can be used as a substitute for wax or car polish.

Wax is specifically designed to protect the clear coat and paint from elements such as snow, UV rays, salt, tree sap, and bird droppings. Fluid Film is a rust-protective coating and a lubricant. It’s not mentioned anywhere that Fluid Film is wax.

Fluid Film is just like aerosol grease. Therefore, it won’t in any way strip off the paint. Fluid Film can only strip paint from a surface when you use a strong cleaner to scrub the Fluid Film from a painted surface.

But on its own, it is harmless. Also, when you look at the ingredients of Fluid Film, which is mainly wool-wax and petroleum oil, there is nothing that poses a threat to the paint.

Fluid Film can soften some undercoating. But the same can’t be said for paint. Fluid Film will not soften paint no matter how frequently you use it.

Will Fluid Film on Paint Fade on Its Own?

If you have some Fluid Film on a painted surface, you can treat it as wax. After a while, it will fade away as it’s exposed to the elements. And because it’s safe on paint, you don’t have to go crazy about getting rid of it.

How Does Fluid Film Compare to Car Paint?

Any car which has been thoroughly primed and sprayed with quality paint should prevent corrosion, even if you reside in the salt belt. Car paint has been doing this for years and doesn’t need an additional product such as Fluid Film.

Chipping will occur on car paint, but that can easily be touched up. Therefore, you can’t compare car paint to Fluid Film, a coating that must be applied regularly to offer protection against corrosion.