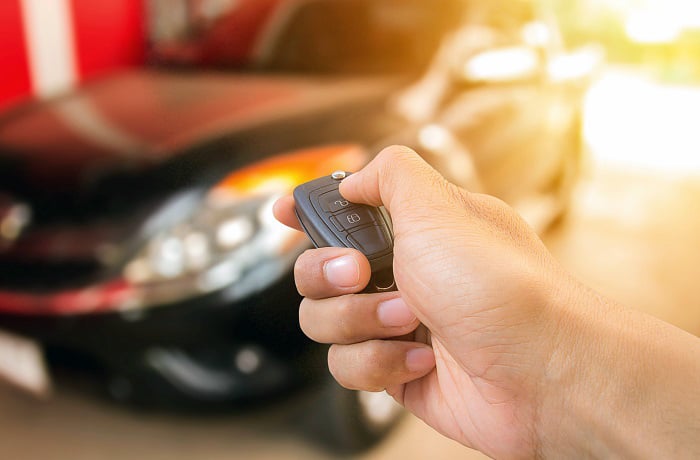 Many things can drain your car’s battery but the anti-theft light isn’t one of them. Understandably, most of us believe that any electrical function that is left on when the car is switched off drains all the power from the battery.

Though true, car manufacturers were aware of the dangers of certain electrical functions such as the alarm system being left running when a car was switched off. And that’s why they designed these systems to consume the least amount of power possible.

An anti-theft light can blink for days and if you have a healthy battery, the moment you switch the car on, the engine should crank without a problem.

Obviously, when you are going on vacation or plan on not using the car during winter, you should disconnect the battery to prevent self-discharge.

And even though the type of LED that is used on your anti-theft light determines whether it can drain a lot of power from the battery or not, the bottom line is, the chances of an anti-theft light draining your battery are very minimal.

If you were suspecting that the anti-theft light is the cause for your woes, look for another culprit.

Why is the Anti-Theft Light Always Blinking?

We need not explain what an anti-theft system is because most car owners are aware of the important role it plays in keeping the vehicle and our belongings safe.

The anti-theft light that occasionally blinks on your dashboard is an indication that the system is on. That’s how anti-theft systems were designed.

If you install one and the light doesn’t blink, then that means the system isn’t active, and probably, your security system isn’t working.

So when you see that light blinking from time to time, know that your car’s anti-theft system is engaged and anyone who tries to break in or start the engine without the key, the alarm will go off.

Most alarm systems are engaged when you lock the doors when the engine is off.

Will the Anti-Theft Light Drain Car Battery When a Car isn’t Running?

The assumption here is that cars are vulnerable to break-ins when the driver or owner isn’t around. It is because of these reasons that these systems are designed to work only when the battery isn’t running.

Now that you get how these systems work, let’s explain whether they can or can’t drain your car battery. For the light to blink, the anti-theft system draws as little as 2mAmps.

A 12v car battery in excellent condition has a capacity of 48 amp-hours. 1 amp equals 1000mAmps.

If you do the calculations you will realize that it will take extremely long for the anti-theft light to use up all the power in a battery. And even if this was to happen, it wouldn’t occur overnight.

Thus far, we have already concluded that an anti-theft light won’t drain your battery. Yes, it will draw some power, but the amount consumed is so little that it wouldn’t make any difference. What about the entire anti-theft system?

Owning a car without an anti-theft system is quite risky especially in these modern times. Burglars are continuing to diverse newer and better ways of accessing vehicles without the owner’s keys.

And car owners need to stay ahead of the game by installing anti-theft systems to safeguard their investment.

Whether factory or aftermarket, car alarm systems rely on battery power to do their job. And when in standby mode, the alarm can’t easily drain the battery even if the battery isn’t charged in weeks.

However, if an alarm is triggered, it can drain the battery in days or after a couple of hours depending on how good your battery is.

Triggered alarm systems are designed to go on and off after a couple of minutes. And this increases the amount of power it consumes from the battery.

Also, if you have instructed your alarm to activate all features such as flashing lights and sirens, it will use up more power and your battery can be drained faster.

You need to understand the different ways these two consume battery power. The anti-theft light won’t drain your battery. But, if you leave the car alarm to go off for long, it can drain the battery.

Can an Old Battery Be Easily Drained by an Anti-Theft Light?

If you have an old battery, you shouldn’t be surprised when it dies off easily. By itself, a dying battery is a sign that it needs to be replaced as soon as possible.

Traditional alarm systems can work well with old batteries and rarely will they drain all the power. However, never install a robust alarm system on a car with an old battery.

These new alarm systems that feature GPS tracking and other advanced features will drain your old battery should the alarm be triggered.

What are the Dangers of Draining a Car Battery?

We have already ruled out that the anti-theft light can’t drain a car battery. But if an advanced alarm system is triggered and your battery is unable to hold a charge, it will be drained in a matter of hours.

There are many dangers of draining a car battery. The first danger is that it can easily leave you stranded in a remote area and this is quite risky.

The other danger is that when your battery dies, so do the alarm system capabilities. This means that your car will be vulnerable to break-ins.

Can a Faulty Theft System Drain Your Car Battery?

A poorly installed anti-theft system can drain your battery. This is very common amongst cars with an aftermarket alarm system.

If you have decided to install such on your car, ensure that you hire a professional electrician to install the anti-theft system.

If you also feel like you are up to the task, you can always install the anti-theft by yourself. But make sure you do it correctly.

How Long Will It Take for Anti-Theft Light to Drain Car Battery?

If the anti-theft isn’t triggered, was installed correctly and you have a healthy battery, that light can blink for more than a month without draining the battery.

Some cars get parked for even two months and when the engine is turned on, it cranks pretty well even without a hiccup.

In most cases, if you are having battery trouble, you should take your eyes off the anti-theft light and look for other culprits.

Can Resetting the Anti-Theft System Help Prevent It from Draining a Car Battery?

Because it’s not the cause, then even if you reset it, nothing will change. Anyway, if you want to learn how to reset an anti-theft system, here is how to go about it.

Ensure that the battery is fully charged, put the key in the ignition, and turn it on but do not crank the engine. Give it some 10 minutes and then remove the key.

Wait for another 10 seconds and put the key back in and switch to on. Repeat this process thrice, your anti-theft light will go off and you will have successfully reset the alarm system.

What Else Could Be Causing My Car Battery to Die?

There are a bunch of other things that could be causing your battery to drain so fast, they include;

If you are unable to diagnose what’s causing your car battery to drain so fast, it may be time that you have it checked by a professional mechanic.

Though not always certain complex functions could be the cause. And only a qualified mechanic can diagnose these problems.

It’s also important to know that car batteries aren’t built to last a lifetime. After a while, they do lose their ability to hold a charge because of old age. And should be replaced.

Can I Prevent My Alarm from Draining Car Battery?

There are certain steps you can take to prevent a triggered alarm from draining your car battery. One of these steps is reducing the sensitivity of the alarm.

A highly sensitive alarm will always go off when exposed to anything even strong wind or loud noises. If you live in a noisy urban area, reduce the sensitivity of your anti-theft, this will prevent it from going off for no reason.

The other thing you can do is to invest in a battery maintainer. This device trickles charge and is very useful when you are parking your car for a long time when going on vacation or because of other reasons.

It’s also advisable to always park your car near you so that you can be alerted when the anti-theft goes off.

Your alarm can only be deactivated by locking the car using the keys. If you are not close by and the alarm gets triggered, it can drain a weak battery.

How To Clean Chromtec Wheels? (Helpful Tips)
How Much Windshield Washer Fluid Does A Car Hold? (Solved)
Do You Tip Windshield Installers? (Explained)
Seafoam Vs. STP Motor Treatment (Compared)